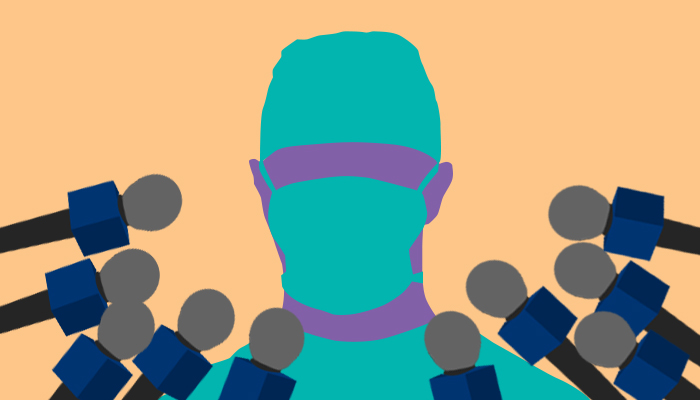 “However, even if I didn’t agree, hearing from individual surgeons or large physician groups is a privilege because of what I know each of you experience on the floor every day.” ©SLS

Over the years one of my most common email subjects written to the media has been “Physicians speak out.”  This is because it isn’t too often that we hear leaders in medicine voicing their opinion on a particular issue.  Public communication should be well planned, and executed thoughtfully, but I speak for many when I say I wish we would hear from surgeons more often.

I read a lot and I read carefully in order to do things like vote properly, choose my health care insurance and write for the masses.  This Summer, when I was evaluating California propositions 45 and 46, which would influence the way health care is delivered in my State, I heard Jeanne Conry over a commercial, a surgeon I admire for her leadership with ACOG.  Once I saw Jeanne, No on Proposition 45 had instant credibility.  She said,  “Treatment decisions should be made by doctors and patients, not someone with a political agenda.”  I couldn’t agree more.  However, even if I didn’t agree, hearing from individual surgeons or large physician groups is a privilege because of what I know each of you experience on the floor every day.  Proposition 45 ended with the voters, and I cannot help but wonder if Jeanne helped kill a bad law all on her own.

And there are more examples of why we need physicians to speak out.  A few at Emory University Medical Center spoke out about the importance of its serious-communicable-disease unit.  They built this before the Ebola outbreak.

Speaking out about the right to contraception, the American Medical Association (AMA), the American Nurses Association, the American Academy of Family Physicians, and the American College of Obstetricians and Gynecologists criticized the Hobby Lobby ruling, arguing that it lets employers interfere with patient care.  I really appreciated AMA President Robert Wah, whom I met at the Million Women March for Endometriosis, when he spoke out about how the decision “intrudes on the patient-physician relationship and will make it more difficult for many women to make their own personal medical decisions.  He called on our public officials to “provide alternative pathways to secure coverage for patients unable to obtain these services as a result of the court’s ruling.”  Robert felt it was important to march with women who are suffering from a misunderstood disease, endometriosis, and he also stands up for women so that they can live their lives with less intrusion from those who want us to believe as they do, instead of trusting women with personal decisions.  We can admire that.

Perhaps the most moving example, though, is Dr. Khassan Baiev, the chief surgeon at Alkhan-Kala Hospital. In Chechnya during the Chechen War of the late 1990s and in early 2000, Dr. Baiev was, for a period, the only doctor serving a population of hundreds of thousands of patients. A report said that “he sometimes performed as many as 60 surgeries a day to save lives and limbs, often without gas, electricity, running water, or dressings.” While the world watched, Dr. Baiev believed it was his medical and ethical obligation to treat all patients on each side of the conflict.  As a result he was threatened and eventually imprisoned in Russia, and is now a refugee in the United States.  But through the conflict he has written a book:  The Oath: A Surgeon Under Fire, and continues to speak out.

Most surgeons today don’t suffer as Dr. Baiev did, but many are facing the tough daily job of practicing medicine in 2015 and also have a lot to offer as a result of this experience.  I urge you to speak out as Jeanne, Robert and Khassan have done, because the world, increasingly a smaller place, needs to hear from you.